Ten years ago when I was rolling the monsoon-soaked mud bogs of McLeod Ganj, my sister-in-law, Zoe, organized an open mic night at Tea O’Clock, a coffee shop just off the main bus stop. She called it ‘Poetry across the Planet’ and explained to the owners, Tenzin and Namgyal, that she hoped to get some local talent up there reading homespun poetry and open verse. Of course, singer-songwriters would be welcome to air their craft as well.

It was a great idea except for one thing: Tenzin owned a couple of amps and a few microphones. As soon as the first guitar player plugged in, music completely dominated Poetry Across the Planet. Zoe attracted a crowd of about a dozen for the first night but six weeks later when I made my final appearance, both the upper and lower floors of Tea O’Clock were packed and a crowd big enough to stop traffic hung outside the door as the electric music could be heard from anywhere in McLeod Ganj.

More and more musicians heard the loud music and showed up with gear. After everyone played a four-tune set it was open jam time and there were a half-dozen rotating musicians who formed the core of the new house band, The Himalayan Avalanche Orchestra. At that point my chops weren’t nearly as nice as some of the better guitar players in town, so I got to strum along on my acoustic while the HAO ripped into a number of didgeridoo-inspired rhythm pieces.

Even though nobody could hear me, I was in the group and I was actually stopped on the streets of McLeod by a hot Israeli chick saying, “Hey – you’re that guitar player – I really love what you guys do.”

It was ridiculously dangerous to my ego and I strutted around town as if I was Townshend in Soho. Zoe’s great idea turned me into a Rock and Roll tool. But there was a positive outcome too. I started writing my own material, something I still do when my brain is either settled or frazzled enough to take to the task. With a half-dozen new tunes in my satchel I looked for other places in town to play and everyone told me to go to Kana Nirvana on the Temple Road for their Monday-Night singer-songwriter showcase. I was more than game for it until I asked my brother Dan if it was a hard place to get to. Dan had been dragging me up a tight set of stepsto the performance area at Tea O’Clock for more than a month. He said there’s no way I was getting up to Kana Nirvana. It was straight up three stories with a wretched open-sewer moat separating the bottom step from the street. I’d relied on both Dan and Zoe for so much stuff that I didn’t push it. The Saturday nights a Tea O’Clock were damn fine nights as it was.

Fast forward to last week and I found myself in a bind. I’d told everyone at 90.4 Tashi Delek I was organizing an open mic at Nick’s Italian Kitchen, a ground-floor restaurant with plenty of space. I spoke with the owner, Nick, and he loved the idea. I made up some flyers and added in the big kicker: ‘All songs will be recorded for playback on 90.4 Tashi Delek the week after the performance!’

As long as the performer plays original material we can put it on the air. There’s just one problem: I only know one other guitar player. That meant I needed to find more players which meant I need to go play a set at Kana Nirvana. I’d been playing at a local drum store (actually just a tarp on the road covering some drums, flutes and didgeridoos) with the sales guy, Nuri, on and off for a few weeks and asked him if he could get me up to Kana Nirvana. Nuri’s the nicest guy in the world and he said it would be no problem. 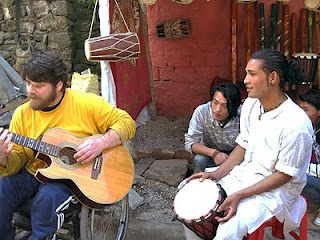 In 2000 I hung out at the Bhagsu Chai stand. Now I hang at Nuri's drum stand.


Having never actually seen the venue, I just assumed it was something we could handle with four hefty dudes. Nuri had to close his store down which meant hauling his inventory to his dad’s place somewhere in the labyrinth behind the Bhagsu road. I watched over the goods and played a set to warm up while he took armloads of instruments down the hill.

Luckily a few friends passed by and I asked them if they could help drag my ass up the stairs to Kana Nirvana. I could see hesitation in their eyes, but the people in this town are just too damn nice. Before long I led a posse down the main market in McLeod and down the hill towards the main temple. But as we got closer, I noticed that for one reason or another, I was down to three people when we got to Kana Nirvana.
And there was great reason for the defection. Below me was the nasty moat and rising above, like Sagamartha herself, were the steps to Kana Nirvana. They were both narrow and steep with the only aid being a solid hand rail guarding a nasty fall to the open lot next door. In order to cross the moat I had to get out of my chair and drag myself across a flimsy piece of press-board that couldn’t even hold my weight. Two guys lifted my ass across and the board was only there to keep my legs from dropping into the filth. 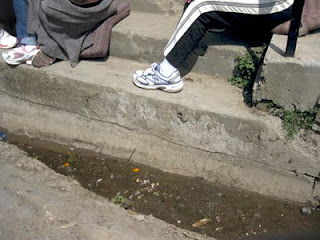 It's hard to tell, but this moat is two feet wide and 18 inches deep. Not leapable in the old Quickie Wheelchair.
Uri, one of the drummers, took my chair and ran it up the 30+ steps to coffee house. Then Jack from Chicago and Ravi from town each grabbed one of my legs as I hoisted myself up towards the top, one pull at a time with the aid of the rail. It took a while to get some rhythm, but once we got it going, we knocked off the first 20 steps without a break. The last ten, however, were even steeper, there was a turn, and there was no more hand rail. 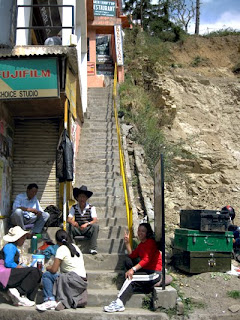 It might be the Stairway to Heaven but it felt like Hell getting up there.
At this point I was surprised I was still wearing pants and my shoes were still on. I tied everything really tight at the bottom but that rarely makes up for not having an ass or a viable Achilles tendon. But, once we got close, we had more than enough helpers to go the rest of the way. Four sturdy horsemen hauled me up the final leg and flopped me in my awaiting chair. The only casualty was Nuri who lagged behind and put his foot through the flimsy board that we left across the moat. He gashed the hell out of his shin and got a toxic soaker for his effort.
At last I’d made it to the sacred confines of Kana Nirvana – only to discover there was only one other guitar player. All that work just to score one player – and he didn’t even want to play. WTF! But the place eventually filled up mostly with westerners on short stays. I got to give them my spiel about coming to the open mic at Nic’s Italian as well as tell them about 90.4 Tashi Delek. I was hoping to find myself in a room full of eager players, and instead landed in a bunch of drummers. Don’t get me wrong – it was a really cool scene – just not worth the effort we all put in to get me there. 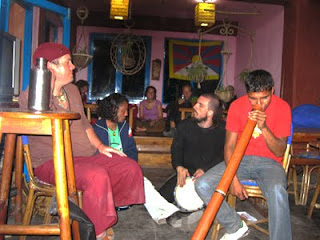 These cats kicked out a hell of a rhythm for the Scarlet-Fire!
But the good part about being the only guitar player is that I had a full house to myself. I played a short set then let the drummers and a novice dig player take the floor. Ten minutes later there were no more takers and a nice robust crowd. I pulled out my bag of tricks and played for over an hour with the help of a fantastic rhythm section.
Set went something like this:
Help Me Along *
Kalsang *
Bhagsunag *
LordTake Me Back to Portland*
Drum/Didgeridoo Set
Dear Prudence (Beatles request)
Scarlet-Fire (couldn’t resist w/the drummers)
I Can See Clearly Now
Dog (written by my dog Sydney)*
Let it Rain
Watchtower
Johnny B. Goode
Encore (they actually asked for one – then again they were stoned, it was Monday night and everything else was closed):
Somebody Tell Me Why I Can’t Get on a Roll *
So in the end it turned out to be a great night and hopefully I got a lot of people to come over to Nick’s on Saturday. The trip down the stairs was much easier as six people took turns and bumped me down each stair. It took a chariot carry to get me over the moat (cracked wood w/blood stain still floating), but soon enough I was humping it up the Bhagsu road back to my crib.
Now I just have to find a half-dozen players for Saturday night!
*My tunes: http://www.thcommunications.com/fun/fork/
Posted by tomhaig at 1:40 PM