After three months in Dharamsala, I finally got enough momentum going to initiate 90.4 Tashi Delek FM’s first ‘Dharamsala Live’ program. The concept was pretty simple. I had to round up the best musicians in town and get them to show up on a Satruday night to play a bunch of original songs. Effecting this plan was a bit more difficult.
When I first arrived I held the misconception that Dharamsala was as happening a town as it was when I was here in 2000. What I didn’t realize was the social scene all but shuts down from December to March. When the weather gets cold people go home at sundown. All but a few restaurants shut down and the steets become deadly silent. Weekends are no different from weekdays. You could hold pistol shooting contests down the Bhagsu Road on a Saturday night in January.

On top of that I burned my leg badly and the risk of infection was so great, I had to limit my motion to only going to the radio station and returning to my room at the Akosh Deep Hotel. I was afraid to turn over at night because putting even a little pressure on the wound could lead to a trip to the Kangra Hospital. I gave up the idea of hosting any kind of event until my fortunes and the night life of Dharamsala returned.

Three weeks ago with the Dalai Lama’s Spring Teachings and Tibetan Uprising Day on the horizon, the town started to come alive. The sunsets got later and night time temps went from 30 degrees to 50. The shops and restaurants kept their doors open later and the streets of McLeod Ganj filled with the eclectic mix of Indians, Tibetans and Westerners from all over the globe. My leg wound was close to healing and was no longer in any danger of infection. 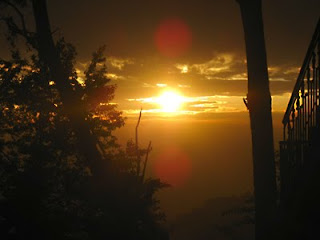 In the dead of winter this usually signaled everyone to go home.
So it was time to kick start the 90.4 Tashi Delek promo campaign. When I first got to town I’d spoken to Nick, the owner of Nick’s Italian Kitchen, about hosting the open mic. He said it was fine with him, but when the months passed without me mentioning it, he though it was a dead deal. But when I rolled in for breakfast last Saturday and asked him if he was ready to actually do it, he nodded  but assumed nothing would come of it. When I got back to the Akosh Deep I opened up my copy of Quark and designed a four-to-the-page handout announcing the event and telling people we would record the music and play it back on the radio. (The original plan was to broadcast it live, but we need a remote system that runs about $1000 to make that happen).

The next order of business was fixing the mini-sound board that had zapped out a few weeks ago. Phuntsok, the director of the radio station, knew an electrician in Lower Dharamsala so he ran the box down the hill and a few days later it came back in perfect working order.

Now I had get people to show up. This called for me running all over town with my guitar, playing songs and giving the handouts to anyone who stopped. If it were as simple as rolling out my door and playing to passers-by it wouldn’t have been much of an effort. But I live about a mile away from the main drag in McLeod and there is a steep quarter mile hill between Bhagsu and McLeod. On the nights where I was really tired I just played outside the Akosh Deep which has a decent amount of local traffic. But to get to the ex-pat crowd I had to hump the hill over to McLeod. I bought a soft-shell case for my guitar that acts like a back pack, and made my way to the drum shop and chai stands. The cool thing about McLeod is nobody is in a hurry so almost anyone will stop and listen to a tune, provided you’re not horrible. In the space of a few nights I’d gotten rid of all my flyers, but still had only confirmed one other guitar player. 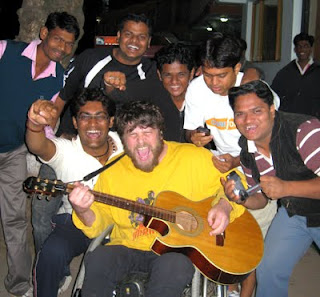 Promo's hard work but it's got to be done!
When Saturday rolled around I slept in then played a long set in front of the Akosh Deep to catch the wave of tourists who flock to Bhagsu on the weekends to take a dip in the town’s healing spa. At 5:00 I showered, packed my guitar, loaded my laptop into my back pack and did a gear check. I put on my new 90.4 Tashi Delek Polo shirt and started the assault on the Bhagsu Road hill.

Rolling up the hill with the guitar is one thing, but hauling up it with a laptop and a bag of recording gear is another. I made it 70 percent to the top then, for the first time, accepted the offer of a push. It wasn’t that I didn’t think I could make it. I was sweating like a nose tackle during summer workouts which is not the best look for an MC. 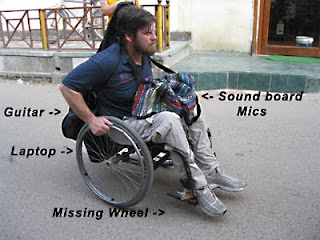 Recording studio on wheels.
Once past the top of the hill, I dropped the long winding section into McLeod Ganj in a wheelie, careful not to let my one remaining caster wheel hit the mine-field of potholes (oh yeah, I forgot to say I’ve been on three wheels for two weeks now). I finally made it to Nick’s where I came upon a very surprised Nick who wasn’t sure if I would actually show.

It was a gorgeous night so Nick’s outdoor patio was hopping, but his inside dinning room was empty. I unloaded all my gear and set up the mixing board, microphones and lap tops. I did a short sound check and noticed the room was still empty with only 15 minutes to show time.

Mercifully a Belgian guitar player walked in holding one of the flyers he said he got from a friend. Then a couple of people I recruited from the Khana Nirvana (see last Wed. post), strolled in and sat at a table. At seven bells there were only seven people at Nick’s. Nick told me to just start playing and people would come in. I'd prepared a speech talking about the radio station and the TCV, but I’d envisioned speaking to a crowd, not a table.

I flipped on the recorder, welcomed the sparsely populated room, then blasted into some of my new material. I’d anticipated the first night wouldn’t be well attended, but considering the effort I’d made, I was hoping for better than just a couple of tables.

An empty room is a scary sight for an event promoter.
Then a Tibetan guitar player showed up. Ten minutes later an Australian violin player arrived with her ukulele-playing cohort. By the time I finished my four-tune set there was actually a murmur developing in the room. I handed the floor off to the Belgian player then rolled over to the door to find a half dozen people standing outside on the road listening. I told them to get their asses inside and by the time the Belgian was done I actually had a crowd. 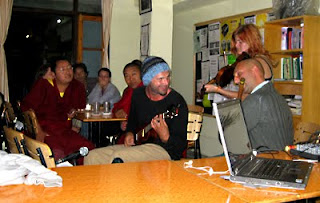 The Bhagsu Road Ramblers (they'd just met the night before).
Then a Nepalese flautist arrived and a couple of drummers. By 8:00 the place was packed which actually became problematic for the purposes of recording. Instead of a room of people listening to music it just became a Saturday night bar scene – albeit with no alcohol. Two monks came in and took over the table next to the microphones and proceeded to talk so loudly that their voices were picked up louder than the flute. 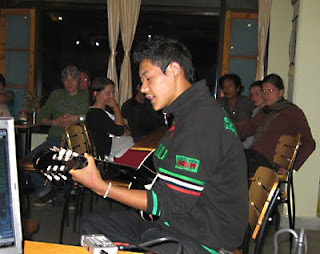 A TCT Student even got into the act. 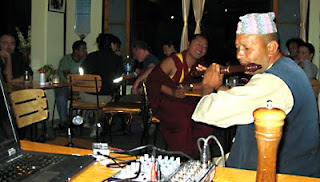 Ram is a local Nepalese flute legend.
But these were problems of affluence. I can try to get something to amplify the acts, but not having a crowd would have been disastrous. The best part was that people were laughing, cheering and singing along when they knew the song. Just an hour earlier I was afraid I was going to leave with my head tucked between my arsecheeks. But this was nothing of the sort. It was an actual happening. 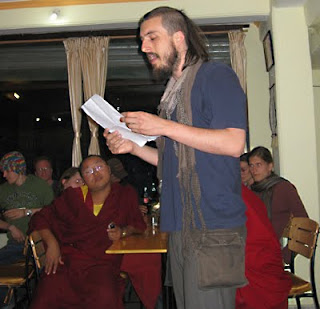 Anu from Kana Nirvana crushed with an a cappella song against terrorism.
After all the acts played, I thanked everyone for coming then said the floor was up for open jamming. All the musicians stayed and a few shyer ones who had just been listening, came up and joined in. We played a half dozen cover tunes letting everyone on the floor take long solos.

This room was much warmer than the one I rolled into an hour earlier.
I was in the middle of singing Folsom Prison Blues when Nick walked over and handed me a note. It read: Closing Time 10 minutes. Normally he sends his workers home around 8:00 but it was coming up on 9:30 and they weren’t expecting to be there that late. We could have kept going for hours, but having someone tell us to shut up was probably the more sane idea. We finished up with a rousing rendition of 'All Along the Watchtower' then they all dispersed into the night. I was the last one to leave but before I rolled out I gave myself a private fist pump. 15 years ago, if you would have told me I would be organizing and emceeing a bunch of musicians in a small Himalayan town, I would have laughed you out of the building.

I packed up my gear, but left the recording equipment at Nicks. The Bhagsu Road is really dark at night and I didn’t need the extra baggage. By the time I got back to the Akosh Deep I was again a sweaty mess. I grabbed a beer from the liquor stall next door then washed up and crawled into bed. When I woke this morning the bottle was open, but still full.
Posted by tomhaig at 2:42 PM