Everyone told me things would start to take off at 90.4 Tashi Delek FM, but for my tastes, things were taking too long. When I arrived in mid-December the town was beginning to hibernate for winter. Only the hardiest ex-pats stayed in town and most of the TCV students and faculty had returned home for winter break.

It was a good time to take stock at our situation, but I wasn’t convinced it was time to sit back and do nothing. There were still plenty of people in town and plenty of stories to cover. Unfortunately there was nobody there to cover them. Our station manager Kalsang and I were a two man crew which left nobody really to go out and get interviews and stories. And the times I did make a contact, they too, were in vacation mode and didn’t really want to come up to the station and talk business. 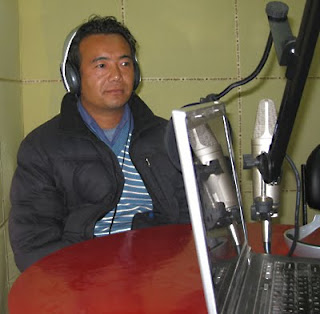 Tenzin Lhoksam, the director of the Tibetan Institute of Performing Arts, was our only interview in January.
January was completely dead with us only spinning Tibetan tunes and me reading a two-minute news summary on the hour. No new content was created except for a couple of commercial scripts. February seemed even more desperate than that. Dharamsala was hit with a winter storm followed by Losar, or Tibetan New Year. At one point I didn’t even go to the station for two weeks. I was wondering what I was actually doing here.

But after the Losar break we had a meeting with our three reporters, our Director Phuntsok and Kalsang. We talked about our lack of initiative and how I felt like we were wandering in the desert. But we also formulated a plan to get back on track. The TCV students were on their way back in as well as the faculty which would make for interesting interview subjects.

Then good weather arrived allowing me much more freedom to roam McLeod Ganj at night. Along with the weather came Tibetan Uprising Day bringing with it the entire hierarchy of Tibetan activists. After meeting nobody for three months, I met just about everybody I’d had email contact with in less than a week. 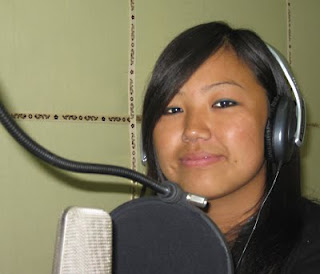 Tenzin Choeden is our ace female reporter.
The energy in town was palpable and it carried over to our three reporters. They hadn’t been making calls or following up on projects since I’d arrived, but suddenly they all started kicking into gear. The ad copy that lay dormant for six weeks got recorded. Interviews were done and script copy was written. The computer geeks from Delhi who said since I arrived they would come up to Dharamsala to configure our sound board finally came up. 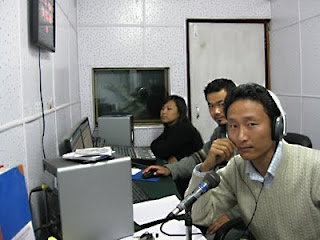 The TDFM team at work in the recording studio.
I found an anonymous donor to pay for station polo shirts, stickers and event banners. And, best of all, we held our first promo event, Dharamsala Live (see previous post). So after some very frustrating months both professionally and personally (the leg wound is 70% covered now!), things are really taking off. Today we’re broadcasting our first home-spun radio program, the recorded sessions from our Dharamsala Live event. Our student broadcasters have even gone live on air and are contributing to our first feature story on the history of the TCV. 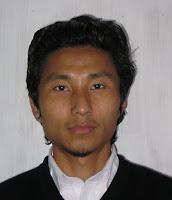 Chimi Tenzing is hard at work recording a history of the Tibetan Childrens Village.

So it may have taken three frustrating months to get going, but 90.4 Tashi Delek FM is on the rise!
Posted by tomhaig at 11:58 AM