I Missed My Home Olympics - AGAIN!

(Sorry for the lack of posts. I've been shut out of my office for nearly 10 days and the Internet connections in town are so slow that even blogspot doesn't load!)

I’m simply obsessed by the Olympics, but for some reason, I’ve done my best to avoid going to them. For the second time in my life, the Olympics are taking place in my home territory, and I’m 12,000 miles away.

In 1992 the Winter Games were held in Albertville, France just an hour away from Les Avenieres, France where I had spent the better part of four years. One of the French families that adopted our team of acrobats was from Albertville and I’d spent tons of time there on bike trips and hiking adventures. The summer before the games I tried as hard as I could to score a job as a translator or English guide, but my skills weren’t exactly unique. In order to work legally as a foreigner in France you had to prove that you were not taking the job of a French person. There wasn’t anybody lining up to light themselves on fire and jump off high dive ladders, so my job there was safe. But just being English-French bilingual wasn’t getting me past the visa office.


So as Albertville was putting the finishing touches on what would prove to be an amazing Olympic games, I was on a plane for – you guessed it – India. By the time the games took place I was living in a hotel on Darling Harbour in Sydney where I’d scored another diving gig. The gig didn’t pay very well, but we only had to work weekends which left me with hours a day to ride my bike and, of course watch the Olympics.


When I say ‘hours a day’ I’m not exaggerating a bit. When the Olympics are on, I’m watching them. I watch pool matches of games I don’t understand between countries I’ve never been to or couldn’t care less about. I watch the quarterfinal rounds of the 10,000 meter runs and 1650 swims. During the Beijing games when I was unemployed I was rotating between six NBC stations and even caught a few soccer matches on Univision.

So, of course, when it was announced that Vancouver, just six hours north of Portland, won the rights to host the 2010 games, I jumped out of my chair and did a set of virtual back flips. This time there’s no way I was missing it. One of my best friends lives in Vancouver, I’d been there plenty of times and I’d even skied Whistler mountain, the home of the Alpine skiing events.

Ever since the ’72 games when Marathoner Frank Shorter became my biggest sports hero, I’ve been nurturing a passion for the Olympics and now finally there was no way I would ever miss it. I’ve been lucky enough to go to Final Fours, a World Series Game, a pair of World Cup Soccer Finals and a dozen stages of the Tour de France. Seeing as I don’t believe the NFL actually exists outside of my television set, college football has no legitimate championship and the NBA doesn’t differentiate between the regular season and the playoffs, the big feather remaining in my sporting cap was a trip to the Olympics. And this one was a shoe-in.


My biggest interview score as a TV reporter in Pullman, WA was with John Furlong, the head of the Vancouver Olympic Committee. He was in town to round up student volunteers and give a presentation at the Cougar Rec Center. We set up our cameras; I miked him up and did a five-minute interview on what kind of help he was looking for as well as how he got involved in the games. The interview went smoothly and we scooped the local NBC station. Their reporter was a 25-year-old kid who never watched much of the Olympics. He had no idea that the competition had a full-fledged Olympic idiot on the mic. 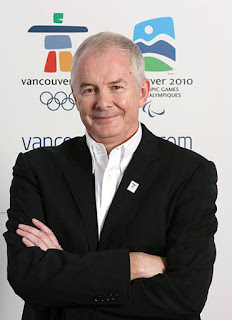 After the interview I handed Mr. Furlong my resume and told him I would quit school on the spot and follow him back to Vancouver if there was a job for me. But getting a job in Canada was the same problem as getting a job in France. Just because I was a foaming-at-the-mouth Olympic fanatic with a couple job skills didn’t mean there weren’t 50,000 Canadians with the same qualifications. And besides, all the paying gigs were already filled. He told me I should contact some of the sponsors, like maybe ADIDAS! (ugh.)


So working at the games didn’t look likely but that didn’t matter. I was going even if that meant sleeping in my van – which I do all the time when I road trip anyway. Even as I took off for this very trip that I’m on right now, I was plotting with my friend Jeff to score tickets and make the road trip. We were sitting at a sports bar with his girlfriend, Diane, who grew up in Vancouver. She said we were more than welcome at her house and that her Polish mother would smother us with food while we were there. So as I left Portland for Charlottesville, Virginia and the Washington D.C. Marathon, I fully expected to be on my way back in a few weeks to start hunting down tickets.


Somehow along the way East, I got rerouted and yesterday morning I flipped on the television set to watch the opening ceremonies – taking place 12,000 miles away. Fortunately ESPN/Star Sports in India is broadcasting four hours live/day which means I’ll be getting up at 5:00 a.m. for the next two weeks. I’m actually pretty surprised they’re giving it that much coverage since they only have a handful of athletes at the games and no contenders. The only sports that matter here are Cricket, Soccer, Field Hockey, Golf and Tennis – oh, and oddly enough, rifle shooting since they’ve won a few Olympic medals. Their entire Winter Olympic team consists of Indians living abroad. Their biggest threat is luger, Shiva Keshavan, who is hoping to crack the top twenty.

But with the influx of new cash in India, that will surely change. Directly behind me are thousands of square miles of potential downhill slopes and only one ski resort (in Minali). Himachal Pradesh is exploding with tourism and the jock market hasn’t even kicked in yet. It won’t be long before the infrastructure improves and a few more of these towns will turn into ski villages. 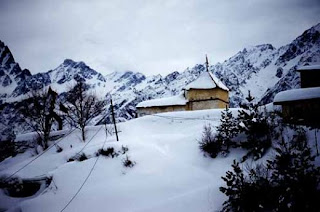 In the meantime, I’ll be happy with my four hours of Olympics per day – as opposed to the dozen I would probably log in the U.S. But knowing the power in Bhagsu will surely go out at some point, I’ve already braced myself for the fact that Lindsay Vonn will be just about to win the women’s downhill on her propped up leg and the screen will go black.
Posted by tomhaig at 11:59 AM