Dharamsala Ready for a Grand Homecoming 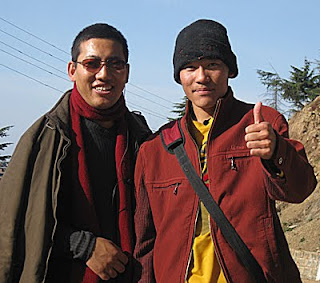 These two monks came down from Manali for this week's festivities.
I’m sure it hasn’t been lost on all of you that His Holiness the Dalai Lama scored several big headlines last week. Up until a month ago, the word here was that HHDL would meet with President Obama sometime in September or October. He’d already scheduled a trip to the States to speak in California and Florida, and it appeared that his D.C. schedule was already booked.

But as the Government in Exile stole the headlines by sending an envoy to Bejing to restart talks, the real back channels were speaking to the White House to set up the Obama meeting. When the meeting was announced, the ambiance in Dharamsala was similar to being in Wisconsin the Monday morning after the Packers beat the Vikings. Everybody had a skip in their step; a smile on their face and sure, the kids got some soft serve at the McLeod bus stop too. 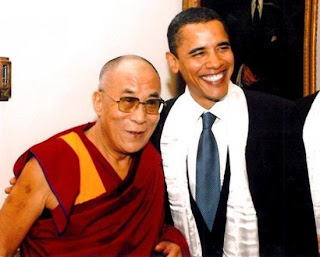 This was the most welcome sight in Dharamsala in almost 18 months.


The more the Chinese objected, the wider the grins on the monks’ faces grew. Last year when Obama blew off HHDL, it was a devastating blow to a community in post-Beijing Olympic depression. The year before the Olympics, Dharamsala was buzzing with energy as the Students for a Free Tibet and the International Committee for Tibet planned and brilliantly executed several non-violent protests that brought their cause to international front pages for the first time since the mid-90’s.


The world was on the side of the Tibetans, and the army of journalists flocking to Beijing weren’t fooled by the slickly-run games. The Chinese government made it worse when they restricted internet access and created off-limit zones. If this was the bold new China, the western journalists weren’t having any of it.
But just as soon as the games were over there was a huge US election and the only American foreign policy issues on the table were the wars in Afghanistan and Iraq. Once again, China had outlasted a Tibetan onslaught, and although world opinion was unanimously in favor of the Tibetans, a bubble had burst in Dharamsala. The expat NGO population in town dwindled and even the Tibetan activists were suffering from a lull in purpose. The Olympic activities could only be considered a success, nonetheless there weren’t any logs left to toss on the fire.
Alice Walker

When the new American president who charged the world’s batteries with post-Bush optimism refused to meet with HHDL it sent Dharamsala into a deeper funk. Phuntosk Dorjee, the director of 90.4 Tashi Delek FM summed it up best when he questioned Pulitzer Prize winner Alice Walker during their Christmas Day interview. Dorjees question was:
“As a Tibetan we have enormous admiration for your writing, and we also know that you addressed President Obama in your open letter to him. Our people have huge expectations from the President of the United States, but lately the bilateral talks are more than the heart can bear. Can the President make a difference in reality knowing that the U.S. owes a big debt to the PRC.”
Walker’s response took over five minutes, but the pain in Dorjee’s voice over the disappointment was palpable. (www.tashidelekfm.com). 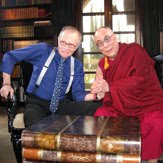 So you can understand why the town has gotten all giddy. Frst with the announcement of the meeting; then with the Chinese condemnation (falling during Losar); and finally with the White House telling the Chinese to piss off.


While HHDL is in the States meeting the President (and Larry King – Oprah must have been booked) and speaking on both coasts, Dharamsala is filling up with Tibetans awaiting his arrival in just a few days. HHDL is scheduled to arrive late Wednesday,  preside over a ceremony marking the 100th anniversary of the 13th Dalai Lama exile to India Thursday morning, then attend Government in Exile meetings for two days followed by a public teaching at the main temple on Sunday morning.
Next time you bitch about doing some business travel check out what the 75-year-old ‘simple monk’ did over the last few days: Dharamsala -> Delhi -> Washington DC -> Hollywood -> Ft. Lauderdale -> Boca Raton -> Delhi -> Dharamsala for four major days of talks. 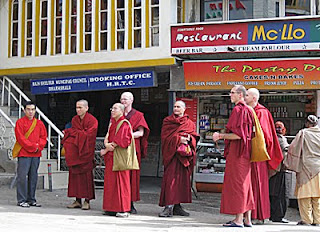 Monks have been pouring in through the McLeod Ganj bus station all week long.
Posted by tomhaig at 1:27 PM