Christianity in the Home of the Dalai Lama 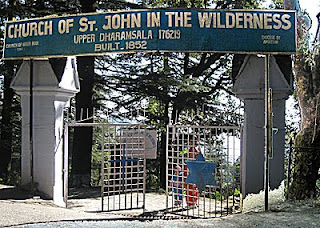 Maybe the oddest location of any Christian church in the world.
One of the strangest sights in a land full of wonders is the mid-19th century Church of St. John in the Wilderness, tucked in the woods between McLeod Ganj and Forsyth Ganj. While it’s mostly ignored by locals, almost every Western visitor takes the time to visit. What is a gothic Anglican Church is doing in the midst of a Hindu region with the face of Buddhism living a quarter mile across the valley from its archivolts. 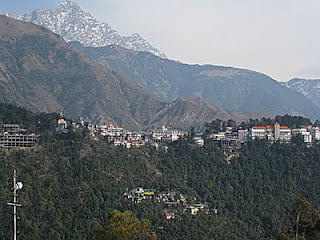 Just across the valley from St. John's is the home of Buddhism's most revered figure.
In 2000 I had a picnic at the church grounds with my brother Dan, his wife Zoe, their daughter Tashi and Lock Berkebeil, a computer security expert from the Bay area who flew in with me from London. We were in really great spirits because the monsoon had temporarily broken giving us a dry mile walk from McLeod to the gates of St. John's.


The gates to the church ground were open, but held together by a chain so that no motorized vehicles could enter. Unfortunately the opening was wide enough for bipeds, not for wheelchairs. On that occasion I hopped out of my chair, crawled along the ground and remounted my chair which had been hoisted over the fence. The four of us downed Zoe’s picnic and washed it down with a bottle of Cote du Rhone that Lock bought in duty free. (He’s actually brought two bottles but I backed into one of them our first week in town and painfully watched while our maid mopped it up in her soap-water bucket.)


The walk through the woods and the view across the valley back at McLeod was a great break from the daily deluge we faced. Before we could take a tour of the church we saw a storm sponge come at us from Lower Dharamsala, and high-tailed it back to town before we got saturated.

Once the monsoon season gave way, I started a training routine that took me past the church every day. It always intrigued me, but seeing as I couldn’t get through the gate by myself, I never went on the grounds again. 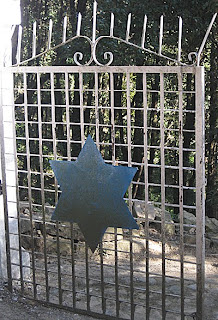 This six-pointed star on the gate has no affiliation with Judaism. Father Kaja just likes it.

That is until two weeks ago when I patiently waited outside the gates for a visitor who was kind enough to fetch the parish priest for me. The visitor, who was a Punjabi tourist, told me that there was no priest, but only a grounds caretaker. I asked him if he could bring him to me so I could get the phone number of the priest. The caretaker, a dark-skinned, sixty-year-old Indian in brown pants, a flannel shirt and a wool cap, approached the fence and asked me if he could help.

“Excuse me sir,” I said, “I would like to interview the parish priest for our new radio station. You wouldn’t happen to have his phone number would you?”


This soft-spoken, timid man looked more like a rail worker than a priest. I told him that I wanted to interview him and he told me he thought he would be a bad subject. I told him I would ask simple questions and he could take all the time he wanted to answer. Reluctantly he agreed and we set up the interview for the next Tuesday.


When Tuesday came, my driver, Suresh, took me to the church gate and ran in to get father Kaja. Father Kaja unlocked the gates and laid down a piece of wood over the drainage grid that accidentally acted as a mote for wheelchairs. Anybody else could walk over the grid, but the metal slats were too wide and my wheels could easily fall through, or worse yet, get bent leaving me without locomotion for the next five months. 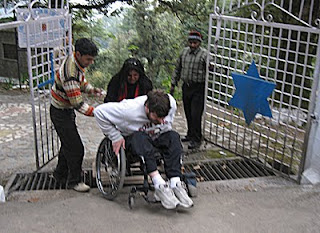 Once over the moat, I rolled down a paved stone path to yet another moat, just outside the two wooden church doors. Father Kaja set the bridge down across the second obstacle and then lifted me up two steps to the a vestibule. The nave opened up to reveal a lofted wooden ceiling that is covered on the outside by corrugated steel. There were seven rows of pews in front and another ten rows of folding chairs towards the rear. A short transept divided the modest altar with a stain-glass background. 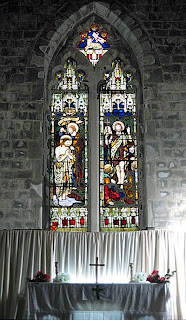 You might have to travel all the way to Delhi to find more stained glass like this.

As I set up my recording equipment, Father Kaja went into the sacristy that doubles as his apartment and came out with a cup of hot chai. He couldn’t have been more accommodating, but unfortunately he was a bit shy with the microphone. As I asked questions, he started to answer, then got timid and turned off his microphone. He gave me great answers off the record, but didn’t think they would be appropriate for the interview. So what resulted was an awkward 20-minute talk that was edited down to less than ten useful minutes. 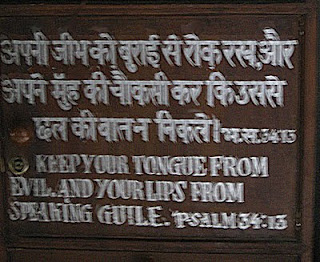 Christian scripture in Hindi text. Strange for Westerners, but normal for Hindus who tend to absorb all other religions as they come.
Luckily, at the end of our talk, a group of western parishioners, who all lived in Dharamsala, came in for their weekly prayer meeting and sat for a much more coherent conversation.
So if you’re interested in what being a Christian is like in the most unlikely of locations, give this podcast a listen. It’s a bit chopped up, but in the end there’s a great story there.