Can One Really Roll in the Himalayas?

A lot of you have responded to some posts saying that you don’t know how I get around this place in a wheelchair. Most of you assume the mountains would be the biggest obstacle, but in reality they're a small part of the issues I face. I’ll just start at the beginning of the day; walk (roll) you through the various obstacles I encounter and show you what needs to be done to combat them. 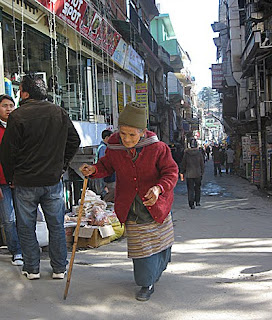 I'm not the only one who's got issues with these hills.

By waking up at the Akash Deep Hotel in the suburb of Bhagsu, I’ve already defeated most of my daily problems. This room is one of only five I’ve found in all of Dharamsala that could pass as handicap accessible, and there are more than 100 hotels and guest houses in the region.

First of all, I have roll-in access from the street. There’s actually a stair at the front door, but I can easily put my hands on each side of the doorway and pull myself up. Secondly the bathroom is on the same level as the room. I spent three months in a room in 2000 where the bathroom was two steps above the level of the floor. Had the bathroom door been wide enough, I probably could have pulled myself in. But it wasn’t, which brings up accessibility rule No. 3: My new bathroom door is wide enough for my chair. But it didn’t start out that way. They had to remove the door from the hinges which usually is an easy task unless the hinges are glued to the door in which case you have to remove the hinges from the door frame – which they did without question.

Once inside, the bathroom is quite huge allowing me to roll about without impediment. I can easily reach the sink and the toilet without having to do any crazy chair gymnastics. That’s a rarity even in U.S. hotels. Had this been the situation with my room in 2000 I probably would have been able to wash my hands everyday and not have gotten the infection that sent me home two months early.

My new bathroom has room for a nice big wooden shower chair which because of the long seat is the most efficient shower chair I’ve ever used. If my leg didn’t have a gaping wound in it, I’d take more showers, but the doc suggested I try to keep the leg as dry as possible. No, mom, there aren’t big plastic bags to wrap it up in.

The only problem with the room is that all the pipes leak which means I have to shut off the water after every use. But that’s standard for Indian bathrooms. My hot water heater works great too; I just have to remember to turn it on an hour before I need hot water. 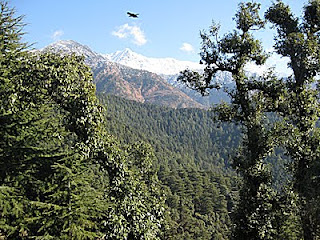 Eventually I do have to leave the room. As beautiful as these puppies are, and as cool as it is to be here;  there are just some things I can't do.
My room at the Akash Deep is much better than just about every handicapped hotel room I’ve ever been in. And that includes some pretty swanky places I’ve stayed at for medical conferences. The room goes for around $15/day which in Indian standards makes me a get-the-hell-out-of-here-crazy-rich-white-muther-fukker. In Portland this studio would go for about double that, and I wouldn’t have room service, cable TV or a maid.

Once I’m dressed and out of the room, I can easily roll the half-mile to McLeod Ganj and pick up just about everything I need. From food to medical supplies; soap to beer. With some difficulty I could roll the three miles up to the entrance to my job at the Tibetan Children’s Village. Then, for the first time, the mountains would become a problem. The roads from Bhagsu to the TCV are challenging, but nothing I haven’t tackled in the past. The road from the TCV entrance to the 90.4 Tashi Delek FM studios is straight up a destroyed road that even the local SUV’s have trouble ascending.

So, the TCV has decided to send me a car every morning. That way I can show up at work un-sweaty and I can haul my computer along with me. The TCV says it’s no problem but it makes me feel like an actual get-the-hell-out-of-here-crazy-rich-white-muther-fukker. All I can do is treat the driver, Suresh, like a co-worker and not some kind of servant. After six weeks I try to joke and kid around as much as I can with him. I’ve invited him for dinner and even after-work beers. He just refuses and still calls me sir. I think he knows I don’t consider myself above him in anyway; he’s just being an incredibly polite person.

Ever since I burned a gaping hole in my leg, I have to start every day with a visit to my doctor at the TCV Health Center. He’s a western-trained Tibetan G.P. but his office is two floors up in the clinic. There is a ramp, but it’s nothing I could ever scale myself. Suresh grabs my chair out of the back of his rig and the two of us struggle like hell to get me up to the second floor. Every day the doctor removes the dressing, scrapes off whatever he thinks is gonna turn green, then coats it in iodine and wraps it back up. Suresh and I decend the ramp, trying not to recreate the O.J. Simpson Naked Gun scene, before he piles me and my chair back in the van. This whole episode, of course, would be unnecessary had I been able to feel my damn leg (ugh). 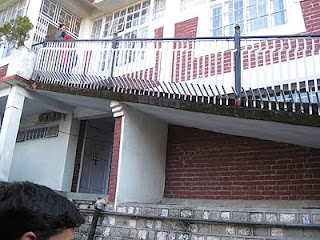 The longest and steepest ramp I've even encountered. It's now been made worse by the fact that the road to this parking lot, which is just as steep, is now under construction.
Once I get to Gmeiner Hall where our studio is located, Suresh again grabs my chair out of the back of his SUV and brings it around to the passenger seat for me to flop into. Suresh and our station manager, Kalsang, lift me up three steps to the front door, trying not to let my wheels slip into a wide drainage grill at the base. From there I roll into the building and face five steps, before a landing leading up to the final 12 steps to the studio. Kalsang and Suresh have done this every single day without a single complaint.

The studio space is tight, but we’ve set it up so I can reach the soundboard, a microphone and all three computers without having to roll around. I flip on my computer, scan the web for little news items and create a little 3-minute news blast that I read once an hour on the hour. Right now, the students are on break so I’ve got some time to work on the station’s website, write my blog, edit photos, edit audio and all sorts of other little busy work things. 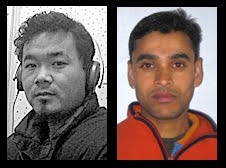 Kalsang and Suresh are saving my arse (and lifting it!) on a daily basis.


This has to keep my busy until my adult class which starts at 4:30. In the meantime I can’t go anywhere. The negatives are that there’s no bathroom on the second floor so I have to pee in a jar and save it until I get lowered down the stairs at the end of the day. The positives are that somebody from the TCV cafeteria brings me a delicious hot lunch every day.
I would love to be able to take an hour at lunch and go watch the basketball or cricket games going on just a few hundred feet away from me, but instead I’m stuck up in the studio. It’s a little annoying now, but eventually the students will arrive and I’ll try to sop up that time by teaching English, French or guitar. 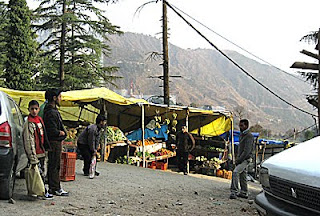 These guys are actually playing cricket on a 10% slope. EVERYBODY makes adjustments here!

Finally after my adult students are done, they help me back down the 21 steps to Suresh’s SUV. They pile me back in the front seat; Suresh drives me down the horrible mountain road to the TCV entrance and then all the way back to my crib in Bhagsu. From there I either order $2/meal room service or roll to one of the half-dozen restaurants in town where I can eat without being lifted up stairs.
On a day to day basis that’s about it. But I feel the wheelchair much more on a day off. I live in Shangra-la, but I’ll never be able to hike the mountains around me. There’s a bustling Indian city just three kilometers away, but without a taxi, I can’t get down there (actually I did it once in 2000, but that’s another story – and nothing I could repeat on a day to day basis). There are at least 20 roof top restaurants I haven’t been to because I need someone to lift me up there. And once up there, there are no bathrooms so I’d be sweating it out until the end of dinner. I have limited access to most every shop, although I can see most of the goods from the street.
So although there are dozens of impediments to me being here, the attitude of the people who help me try to overcome them are more than worth the effort in being here.
Goes something like this: