Did I Really Need a Two-Week Vacation?

As it turns out my two-day snow vacation turned into a very unexpected two-week work vacation. Had I known about it in advance I could have made something of it, but it all developed on a day to day basis. First the snow hit and that shut off the road to the studio for four days. The rest of Dharamsala was fine after two days, but the unpaved cliff-hanging road up to the studio is about 500 feet higher than McLeod Ganj. It’s also in a forest and gets no sun so it was probably the last road to clear in the entire city.

When it cleared, however, it was the beginning of Losar (Tibetan New Year - marked among other things, by putting up new prayer flags) and, like Christmas vacation in the States, nobody was doing squat at work. Then Losar finally hit and McLeod Ganj turned into a ghost town – at least as far as the Tibetans are concerned. The Dalai Lama said that in respect to those killed in over the Olympic Games massacre, this Losar was to be a solemn, family affair, not a civic blowout like it is most years. 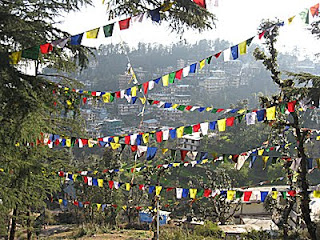 Even though it was a mellow Losar, McLeod Ganj is still a pretty special place to spend it.
The shops closed for three days and the only Tibetans I saw in town were the local hotel owners who still had guests. But even those hotel restaurants were shut down. Luckily there are plenty of Indian business that never close so it actually made me go into some business that I hadn’t been into. I found many of the Indian shops to be much better stocked than their Tibetan counterparts.
The biggest example of this was the Indian pharmacy located 50 yards from the Snow Lion Medical Store, the only pharmacy I ever used in McLeod Ganj. The owner of the Snow Lion is an elderly Tibetan doctor who only opens up between 11:00 and 5:00 which means I can only get there on weekends. Almost every time I’ve asked for medicine or handicapped supplies he’s either told me I have to go to lower Dharamsala (300 Rs cab ride) or he’s bungled the order. He never told me there was a perfectly good pharmacy just off the McLeod bus station.
I stopped off at my favorite hole-in the-wall Indian fast-food place and asked the guy if he knew any place where I could get some gauze for my still-festering burn wound and he pointed me to the Indian pharmacy which was a bit hidden underneath one of the restaurants. I rolled in and found everything I needed, including antibiotics. It was all cheaper too. The free market has spoken and I’m now a connoisseur of Indian businesses! 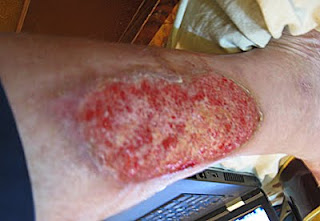 Maybe TMI. But at least you can all see it's healing - albeit SLOWLY.
Once the Tibetan shops opened up, I assumed we would go back to work, but that was not the case. The station manager wasn’t answering his phone and nobody was answering the station phone. The big boss spent Losar at a Tibetan settlement he helped create in Mongod in southern (3-day bus/train ride each way!).
After 10 days of being shut out of work and the free internet & lunch that came with it, I finally got a call from the station manager who said he had two weddings to go to over the weekend and he wouldn’t be back in until Monday (today). At now I knew I didn’t have to be anywhere, so I tried to make the best of it and get some workouts in. And of course led to another meltdown.
Most of the roads in Dharamsala have been resurfaced since I was here in 2000, but that doesn’t mean they’ve been maintained. The worst example of this is the road connecting Bhagsu to McLeod Ganj. There’s a steep quarter-mile climb between the two villages and it’s a nice fun challenge. At the bottom of each side of the climb at the entrance to either town, the road is starting to crumble again. Busting up to the top of a climb is always the hard part, but the reward is dropping down the other side and picking up some good speed around the curves. I like it best when I’ve been honked at by an obnoxious driver on the way up and I’m passing them in traffic on the way down.
My chair has built in suspension and after 13 years of riding this bitch, I can control it like Korean video game champ. I'm always tweaking my big wheels, but I’d never thought one of the small caster wheels in front could crack off. I’ve had them break in half before and that’s a pretty easy replacement, even in . But breaking right off the mounting is another situation and that requires another trip to my favorite aluminum welder who is 40-minutes away in Mataur.

One of these wheels is not like the other...
That’s a 1000 Rs ($22 – or the price of ten amazing Indian meals) cab ride, if I could actually find the shop again. There's no way I could so it would probably require an additional 1000 Rs while the cabbie and I drive all over paradise looking for the place. But the TCV is really good about such things so I decided to wait until I went back to work to see when they could swing a ride out there. So for the last six days I’ve been a three-wheeled bandit. The chair is amazingly balanced so I only feel it when I’m getting in or out. But one more nice hit on the existing caster would probably put me in the hospital again and leave me chairless until we got to the welder.
It would be really great if I could sit back in my room and watch the Olympics until the TCV opened up again, but since I wasn’t going to work on a daily basis, I also wasn’t going to the clinic either. I still had to change my leg bandage at least every other day which meant going into town for supplies as well as stopping off at the Delek Hospital Clinic, a small nursing station in McLeod Ganj. The nurses know me well and do a bang up job of changing my dressing, but they were gone for Losar and don’t work weekends. So for one reason or another, I had to bust into town every day to do something.
The chair and the leg wound appeared to handle it quite well, and I was even able to hit up an Internet café a few times (VERY slow connections) over the mini-break. On Friday I was getting low on funds so I went to the McLeod Ganj Bank of India ATM (still freaks me out that it exists) and tried to pull out 1000 Rs to keep me going until the end of the month. I slipped the card in and tried to pull out the grand when I got the infamous ‘Insufficient Funds’ message.
Last time I pulled out a grand there was plenty of Rupees in there, so this must be some glitch. I put the card back in and tried to pull out 500 Rs. Again, the I.F message appeared. I got plenty freaked out this time because I should have close to 20,000 Rs in there and they say I don’t even have 500. I also read last week that the Bank of the Punjab ATM near the TCV was ripped off by an ATM maintenance worker who somehow figured out how to get in and grab 500,000 Rs from it. (He turned himself in after realizing he was the only guy in Dharamsala who could have pulled off the job.)

I wasn’t sure if I’d been hoodwinked by Indian thieves or if somehow the bank had made a terrible mistake. But either way, I found myself in the with less than two dollars to my name. I quickly went to the Internet Café and checked my account which was, in fact, down to two dollars. The only place that has access to my account is my car insurance company whom I pay online religiously each month. They had no records of any transactions within the last thirty days.
Instead of spending my last few dollars on FaceBook, I sent my brother, Dan, an email telling him I was screwed and asked him to contact my bank. Then I rolled back to Bhagsu and tried to watch the Olympics without freaking out on the fact that I didn’t even have enough money to pay for my bandages or antibiotics.
It took a day to sort it out, but the insurance company somehow decided I wanted to pay the entire 6-month bill and drained my bank account. I still have no idea why, but at least I know I don’t have to send them another payment until July. Brother Dan bailed me out until the end of the month and I breathed much easier.
The freakouts never seem to stop on this trip which is getting QUITE OLD. I hope this makes good reading for you all, cause I’m sick of it. 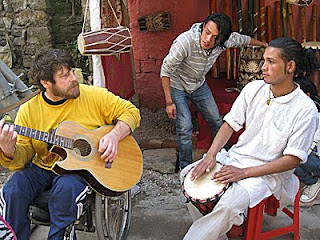 Now THIS is how I anticipated spending weekends in McLeod! The two of us built up a nice crowd of about 50 people, but had to stop because we caused a traffic jam.
Finally on my last day before going back to work, I had a most awesome and calm day carrying my guitar to a bunch of chai shaks and playing a ton of music. The temperature still drops to 32 at night, but during the day it’s a nice balmy 65. So here’s to more days like today and NO MORE FREAKOUTS!