If you’ve ever lived abroad, you get a feeling a few months into the trip that you’re actually getting used to the place and it’s not freaking you out every day. Nothing will shatter that delusion faster than attending a wedding in your new country.

I’ve been to several weddings outside of the U.S. but none of them are like our U.S. bacchanaliae. When I lived in Taiwan in 1987 I went to a wedding at a huge banquet hall. The place was packed and as noisy as a boxing match. The bride, groom and their parents were busy doing something at the front of the room while everyone else was yukking it up with ample servings of rice wine. About an hour into it, the wedding party stood up, turned around and everyone applauded. I asked my friend Larry if they were about to start the ceremony. “No,” he said. “It’s all finished. Now it’s just a party.”

I went to a similar affair in Dubai except that the only women talking were the six synchronized swimmers on our team. All the other voices were from Arab males – all of whom were trying to chat up our six women. The Arab women were covered head to toe, but when one of our swimmers went into the bathroom she reported that underneath the burka, the women had more makeup on than she used for her swimming routines.

I went to a blowout of a wedding in France, which was much like an American wedding except when it came to the groom removing the bride’s garter belt. When this happens all the men go to one side of the room and all the women go to the other. The men throw money in the center to have the groom raise the belt higher and the women throw money in to have it lowered. The couple cleared close to $500 US from this stunt.

But I have NEVER been to anything quite like a Newari wedding. It’s so complicated that the woman who invited me – who was the sister of the bride – had no idea what was going on most of the time.

And it took a LONG time.

I was told to arrive at 9 a.m., but when I got there the ceremony had already begun. The wedding was being held in a banquet hall that consisted of two 2500 ft. square rooms. One room was for rituals and the other was for eating. The father of the bride is a patient at SIRC and his daughter, Rownika is my volunteer production assistant. I rolled into the room to see Rownika’s sister cutting up a piece of wedding cake and taking a bite. I wondered how much I’d missed – and I wondered where Rownika was. One would think the bride’s sister would be around for such events, but she was nowhere to be seen.

After the cake cutting was done we were ushered into the dining hall for breakfast. I sat with a table of people who spoke no English, so I wasn’t getting any good information on the day’s schedule. I finished the meal and out of the corner of my eye, saw Rownika dash by. I caught up to her and after telling her she looked absolutely stunning (she should have posed for bridesmaid magazine), I asked her what was going on? How did she miss the cake cutting ceremony?

Rownika informed me that this was the first of a dozen rituals that would take place throughout the day. Traditionally these rituals took place over a four day period, but the modern ceremony crams them all into one day. At first I thought four-days was pretty extreme until I remembered that U.S. weddings usually take place over a three-day span; bachelor/bachelorette party, rehearsal & dinner and finally the wedding and the reception.

The big difference is that these rituals are solemn religious ceremonies in which neither the bride nor the groom smile.  They wear sad faces as a sign of respect to their families. They have to show sorrow for leaving their parents’ house, not happiness at starting a new life. This didn’t quite jive with anything I’ve ever thought of for a wedding. Which of course reminded me that without speaking any Nepali, I really don’t have a clue as to what is going on here. I just shoot film and hope for the best.


Rownika was quite busy, but I did manage to corner her from time to time to ask here some simple questions – none of which had simple answers. She kept on introducing me to her brothers and sisters until the list became way too long for just one family.

“How many brothers and sisters do you have?” I asked.

“Oh, it’s really just me and my two sisters,” she said. “But we consider all cousins as brothers and sisters.”

“She is at home preparing the new house,” she said.

“Wait, she’s missing her own son’s wedding?” I asked. “I think my mom would bust into here with a gun if she couldn’t come!”

“Maybe, but that’s not our culture. Her job is to prepare the new home.”

At no time during the entire day was the group addressed as a whole. In fact, most of the rituals were only watched by 20 people, while the rest of the party was either in the dining room eating, or just sitting at other tables completely ignoring what was going on with the couple. Food was constantly being passed around the room, but this did not mean that the ceremonies didn’t stop for a full huge Nepali lunch.


After lunch the first sign of alcohol was introduced into the proceedings, but it was just a few small glasses of beer mixed in with the rest of the drinks being served. I grabbed one and it disappeared before I could even set it down. Then I looked around and noticed that I was one of three people out of about 100 who was drinking a beer. This was not the slop-fest that US weddings are known for.

The rituals continued for four more hours and although it never got boring, I stopped feeling compelled to jump in and see what was going on. I hung back with the cousins for a few of them and answered the same questions over and over again; I’m from America. I make videos for the SIRC. Yes, I met Rownika and her dad at the SIRC. Yes, I like Nepal quite a bit. No, I will not be staying here.

I started packing an inflatable globe a few years back and it has come in very handy on any number of occasions. Here it was a grand success as several of Rownika’s relatives have lived abroad. It also doubles as a beach ball to toss at kids who are bored out of their skull.

Eventually the final rituals ended and the wedding party went outside for the thousands of pictures that needed to be taken. It was six o’clock and things were winding down so I asked Rownika where the after party would take place. She looked incredulously at me and said, “But we were at a party all day. Aren’t you tired?”

“Not really,” I said. “I just assumed there was a big party after all the rituals?” 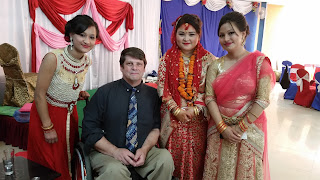 The three sisters and Shrek. (bride is 2nd from right)

I assumed there would be a big long after party, but again, that’s what Americans do, not Newaris. I’d actually booked a room in Thamel assuming I’d be out past the 9 p.m. cab curfew when all fares double. Instead I grabbed a cab back to my room in Suryabinayak and actually made it home in time for supper. Having stuffed myself all day, I had no interest in anymore food – something that shocked my house parents.