Diary of a Mad Bootlegger

With all apologies to Matt Scotty and Ken Magee, who invited me into the 10 albums meme, I have broken the rules and posted albums with quite a bit of editorial comment. I just couldn't help myself. These records meant the world to me. They are the main reason I've been a musician for 35 years and spent thousands and thousands of hours trying in vain to match their brilliance.

But there's one more rule I have to break and that is by listing my No. 10 Album -  the SONY Walkman Pro 6 bootlegging deck. After just my first few Grateful Dead shows, I found my way into the tapers pit and discovered the wonders of recording live concerts. All you had to do to join the club was buy one of these tiny recorders and any of the guys with the huge rigs and 17" mics would let you plug right into their box - provided you hung around to flip the tape when needed. You didn't necessarily have to be straight to do this, but if you were too zodded out, or if you uttered a single sound, you would be dismissed from the pit. It wasn't as fun as running wildly around the venue and screaming all the lyrics, but if you did your homework, you left the show with a nearly pristine recording that would be the envy of all your friends once you landed back at your home base. 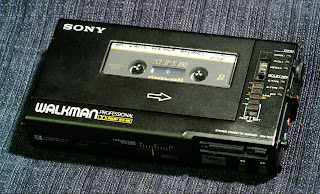 Our group of Dead Heads had aquired one of these high-quality recording units and everytime we went out on tour, it was assumed you would take one night to keep your shit together and watch the deck. It also proved to be home base for everyone we were traveling with as it was the only consistent location at each venue - directly behind the sound board.

Quite quickly, the Dead shows became routine to bootleg and not much of a challenge. But I put my bootlegging feet to the flames in 1985 when I decided to record the entire 16 hours of the first Farm Aid Concert, which took place just a few blocks from the Chateau Relaxeau, my college home in Champaign, Illinois. I borrowed the deck and a mic, stuffed it into my trousers and limped into Memorial Stadium using a crutch which would become my mic stand for the day. I dished off 12 blank 90-minute Maxell  UDXLII tapes to all my friends who easily walked them in one at a time. (Actually the security guards had no chance against us. The Diving Illini used Memorial Stadium as our training center. We knew every inch of that place, and the night before we stashed a cooler with beers and dry ice to make sure we were well hydrated throughout the day.)  By 8 a.m., I was rolling as When Willie Nelson and Neil Young took to the stage and opened up the marathon festival with "There Are No More Real Cowboys in This Land." We all took turns holding the crutch in the air and flipping the tapes. The end result was an incredible audio document of 50 of the greatest rock and country acts in history.*

I was desperately poor in college and had no resources to purchase a Pro-6.  But just three years after my first stint in the tapers pit, I found myself in the bowels of the Kowloon electronics market, with a fresh wad of cash from my first job and a garden full of brand-new 1/2 priced, tax-free electronics. I threw down the equivelant of $150 and grabbed a taxi back to my flat holding the first big purchase of my new adult life - a bootlegging deck.

I was also talked into buying a SONY MC3 condenser mic which was the perfect mic for the Pro 6. I spent the next day walking around Hong Kong recording sounds and asking people to talk into the mic. When I got back to my room, I listened to the tape and discovered the mic to be crystal clear. The tape, which I eventually foolishly recorded over, was as clean as any tape I'd ever pulled out of the tapers pit. It was magic and I was hooked.

For the next five years I traveled around the world recording every band I saw.  I bought the deck to record Dead shows, but as it turns out, my job kept me out of the States for years at a time and I didn't get to see many Dead shows. In their stead was a golden four-year stand at the Jazz a Vienne festival, 30-minutes south of Lyon, which was tantamount to receivng a degree in contemporary jazz. The Pro-6 and EMC-3 recorded all the greatest active jazz players on the globe. Chick Corea, Stanley Clarke, Stanley Jordan, John McLaughlin, Al Dimeola, Bireli Lagrene, McCoy Tyner, Bob Berg, Herbie Hitchcock, Stan Getz, Lee Ritenour, Carlos Santana with Wayne Shorter (1:45 - no vocals), Joe Zawinul, Ron Carter, Lena Horne, Betty Carter... and finally on my very last night in 1991, Miles Davis. (10 weeks and 5 shows after I recorded him, he was gone.)

And then finally, the day I was leaving France after the best four years of my life, one of my closest friends STOLE my bootlegging kit. While I was at work finalizing the end of my contract, he doubled back to my house and stole the black leather satchell that I bought at the Grand Bazaar in Istanbul that held the Pro-6, the ECM-3, all the patch cords and batteries and the last 2 recordings I'd made - Lena Horne and Miles Davis.

I've since encountered the theif on many occassions and he explained to me that he had a drug problem (he did) and he was young...  I forgave him. But when I asked him what he did with it he said, "I threw the tapes out and sold the Walkman..." I unforgave him. For a few years.   Now we're friends again.  Kinda.

I ended up buying another Pro-6 a year later, and made some great recordings (Pearl Jam w/Neal, Phish [x3], 10,000 Maniacs, Allman's, Blues Traveler - My last Dead shows at Portland Meadows), but it wasn't quite the same. And then concerts got too expensive... and I got divorced and I moved 20 times... and now I have no idea where that deck is.

But without doubt the No. 1 Album on my list is my Walkman Pro-6.

Posted by tomhaig at 9:50 AM No comments: