What I thought would be a temporary setback has become a major bummer for this trip. My laptop has completely fried taking with it my ability to sit in my room at night and write these blog posts. I do have computer access at work, but I also have stuff to do at work so it's not real cool to spend a couple hours writing up posts and editing pics. And these computers don't have Photoshop on them either so I'm forced to use some piece-of-crud Microsoft Photo Editor to tweak my pics. Quite disappointing, but I'll try to make a bit of a go at it anyway.

Aside from the computer crash, life here in Dharamsala has improved greatly. The reporters at the station are really cranking it up and we're almost ready for an official launch. The weather has gone from 'really nice' to mostly 'freaking fantastic'. We've got a high of about 75 degrees every day and a low of around 45 at night. Some days we have clouds, but most days we don't bother with them. McLeod Ganj really is a paradise this time of year. No cooler place in the world to be. 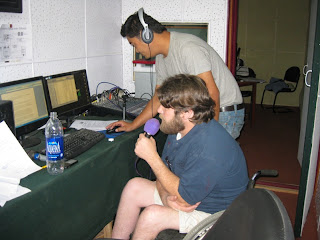 "And now back to the music on 90.4 Tashi Delek FM!"
Our 'Dharamsala Live' open mics have become a huge hit. Last Saturday we had a crowd of about 50 people inside Nick's Italian Kitchen, another 20 listening on the outdoor patio and a slew of passers by on the street who created a traffic jam. The musicians ranged from a Swedish harmonica player to an old English loon who got the entire crowd singing, "I Love Life!" 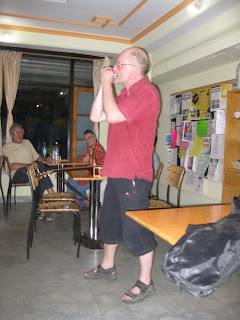 Rolf just wailed away on his harps! 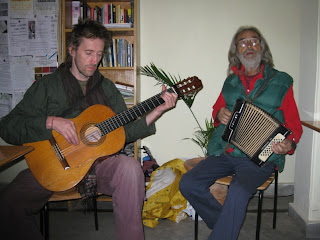 Stevie P. and Johnny had the entire crowd singing nearly every tune.
I'm getting my kicks out of it to because I play a 30-45 minute set by myself while the crowd slowly comes in. We announced a 7:00 start, but the musicians don't start showing up until 7:30. As long as I don't see people running out of the restaurant, I'll keep playing! 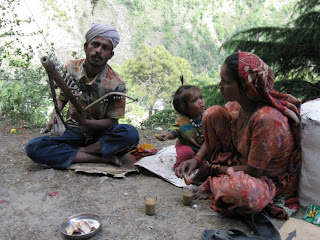 I begged this street musician to come in and play his tuntuna, but the room full on Ex-pats freaked him out.
Next week is the biggest event in Dharamsala all year: The IPL Cricket Matches. The 25,000 seat stadium will be packed and the Dalai Lama himself is going to make it down to Lower Dharamsala on Sunday afternoon to catch a few overs.

So I'll keep posting sporadically, but until my computer comes back, I'm down to about one a week. Thanks for reading you guys!
Posted by tomhaig at 12:11 PM