The Return to Kathmandu

It’s been a week since I landed in Kathmandu and not a day has passed where something pretty off-the-wall has gone down. But it’s a completely different place than what I left in 1991.  I first came to Kathmandu after a 36 hour stay in New Delhi. I’d been living in France for the better part of four years and my soon-to-be wife/ex-wife Rachel and I had decided to travel to our next high diving gig in Australia by crossing Asia over land. Before we left we stopped off at the Indian embassy in Paris to get Indian visas. We were told by a woman at the embassy that as long as we had plane tickets in hand showing we were moving on, we could ask for a transfer visa at the airport.

This turned out to be 100 percent crap information, which is something any experienced traveler on the subcontinent needs to get used to. Shit doesn’t work here and people will say “yes” just so you’ll move on and get out of their way. We arrived in Delhi and the passport control officer looked at us like we were high school kids. Americans DO have to get visas to India. Our flight wasn’t scheduled to leave New Delhi for four more weeks so we had to think quick. The man at passport control told us he could issue us 72-hour transit visas, but if we ever wanted to see our passports again, we needed to come back to the airport with plane tickets leading out of India.

So we dove headlong into the morass of Delhi which in 1991 was a gigantic clusterphuck of black air and raw sewage. We were seasoned travelers at this point, but India hit us like an Ali upper cut. We got ripped off by rickshaw drivers who wouldn’t take us where we wanted to go – only to discover that no hotel would take us without our passports. We also discovered that we needed our passports to do things like change money and buy airplane tickets. It was the single most maddening day of panic-stricken travel I can remember. Eventually we were able to convince people that the receipt we had for our passports, along with drivers’ licenses and even amusement park IDs were all we could show them. We were able to change money, buy two tickets to Nepal and crash in one of the sleaziest dive hotels either of us had ever stayed in. 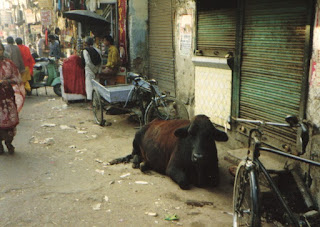 Paharganj area of Delhi circa 1991.

Our flight left at 8 a.m. which meant we had to leave the crash pad by 5. By the time we hopped our rickshaw, I was working on 40 hours with no sleep and was doing my best just to keep an eye on our gear. We made it to passport control, where miraculously our passports were waiting for us. We showed them our tickets to Nepal (which still requires no advance visa) and we made our flight.

Lifting out of the quagmire of 1990s urban India into the gracious hands of the Kathmandu Valley was one of the greatest two-hour transitions I’ve ever made. The Himalayas were screaming at us while the noise and chaos of Delhi was replaced by a slow paced, almost over-friendly vibe. People weren’t trying to rip us off; they were actually trying to help us. We gave directions from our Lonely Planet book to a rickshaw driver – and he took us right there!!!

Our two weeks in Nepal bring back nothing but memories that were both peaceful and stunning. We saw Mount Everest; we rafted the Tsuli River; we spent 8 hours riding on top of a bus to Pokhara and even did a mini trek to see the 24,000 ft. Annapurna mountain god, Machipuchare – which today remains the most stunning sight I’ve ever seen in my life. 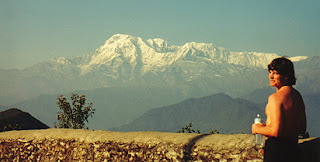 Machapuchare. Yes, it is a real mountain.

I’ve got a lot of amazing memories in the bank to override just about any amount of negativity that 2016 Nepal could throw at me. But wow, has it ever been tested. The population of Kathmandu in 1991 was around a half a million people. Now it has ballooned to close to three and one half million. I live next to the ancient city of Bhaktapur. In 1991, that was a nice afternoon’s mountain bike ride through flowing green terrace farms. Now it’s straight shot on a four-lane highway with houses and business lining the road the entire way. 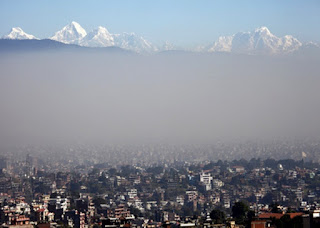 Sunny day in the Kathmandu Valley.

With that level of growth comes a nearly intolerable level of air pollution as well as traffic jams that can crush the spirit. There are water shortages and my house only gets about an hour of electricity a day. There is Wi-Fi at the house, but it’s rarely functional and when it is, I think I could manually type letters faster than individual bytes are downloaded. There is a gas shortage that has kicked the price of taxis to nearly western standards. It cost me $20 US to ride 8 miles into the center and back. It was $10 before the gas crisis, probably $2 in 1991. I’ve got no TV and although my phone works, the podcasts and tunes I listen to before going to bed are way too phat to stream.

Much of this inconvenience is due, not to the recent earthquake, but to the fuel embargo which is blamed on both the Indian government and separatist protests by the Madheshi people who live in the territory on the Indian border south of Kathmandu – and are supported by the Indian government. Both groups claim innocence, but fuel is pricey and lines outside of gas stations can run a kilometer. 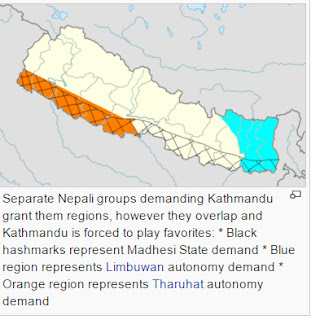 There’s also the issue of being disabled in a country that has nearly no disability infrastructure. I can’t hop a bus. Sidewalks, if they exist, have no curb cuts. All the ATMs, which are my only access to cash, are placed on top of steps.  I have no access to any business above the ground floor. I haven’t seen a structure with an elevator, and in a country where electricity is a luxury, you wouldn’t catch me in one if it existed. Oddly enough, the earthquake damage that I feared before I arrived hasn’t even entered into the picture.

So one might ask the question: Why the hell am I living here? The answer lies in the amazing people I work with at the Spinal Injury Rehabilitation Center.

Who you will all get to meet in due time…
Posted by tomhaig at 12:18 PM