One of the biggest blunders I’ve ever made in my traveling career came this week six years ago. I was living in Bagsunag, a tiny tourist enclave about a mile from McLeod Ganj, more well known as the home of the Dalai Lama. It was Friday night and I was shagged out after a long week of trying to get an all-music Tibetan radio station into the news business. When I got home, I rolled next door to the local bottle shop and picked up a pair of Kingfisher beers. I asked the owner, who I’d been friends with for a few months, if there was anything happening on Saturday.

I wrote "Bagsunag" on the steps of that bottle shop. One of my better efforts.

I was pretty exhausted, but I knew if there was some kind of festival in the village, we had to cover it. We were training four high schoolers as reporters, but they never seemed to be able to come up with any stories. So if there was some big festival and they didn’t tell me about it, I just had to assume they didn’t want to work on their day off.

“What kind of festival is it?” I asked.

“Oh, so it’s not some big gathering?”

“No, just for families.”

As long as there wasn’t some big public gathering, we didn’t need to cover it, so I grabbed my beers and rolled into my room. Not only was I shagged out, I was also recovering from a severe leg burn and I had doctor’s orders not to roll around more than necessary. I had a couple of movies to watch on the computer and my cricket team, The Punjabi Kings, we playing a match, so I decided to pack it in and just hang out at my crib all day.

When I went outside on Sunday I saw that the town was soaked in a rainbow of colors and it just never occurred to me that a “Holy” festival was actually “Holi” the Hindu festival of colors. I didn’t know the name of it, but it had been on my bucket list for years.  I basically slept right through it. I was stunned at my stupidity and I’ve been regretting it ever since.

Until this Tuesday. Now, I live with a wonderful Nepalese family in a neighborhood chocked full of kids so there was no missing Holi. Up in Dharamsala, nobody even mentioned it to me, but here in Bahktapor, it’s all anyone could talk about for days leading up to it.

My flatmate, Fiona Stephens, a nurse from the UK and Hongkui Kim a visiting Korean occupational therapist and I were woken up by the neighborhood kids pounding on our door, yelling at us to hurry up. They had the same exuberance as any American kid would have on Christmas morning.
We yelled back through the door, “Why? I’m tired. I want to go back to bed. Why are you so loud this morning!”

To which they all screamed, “No no!!! Come now! Come Mr. Tom! Come now Fiona!!”
We teased back, “But I haven’t had breakfast yet. I don’t know what clothes to wear. I haven’t had a shower yet!” 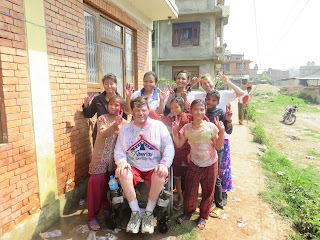 We pushed open the door, strolled out towards the sidewalk and got pelted over and over with colored powder and tiny bags of water. The kids howled with laughter until we picked up some bags ourselves, filled them with water and returned fire.

They screamed bloody murder then went back in with more colored powder – and this time one of them picked up the full bucket they’d been using to fill their bags and dumped it over my head. While the other adults could run up and down the thin dirt trail that leads to our house, I was stuck in the mud. I target practice.

I was giving as good as I was getting until a 10-year-old boy dumped a little bucket over my head that obviously did not come from the faucet. Faucet water is actually pretty bad, but he must have pulled this water right from the ditch, because it was a foul smelling concoction that nearly brought me to puke. My happy face was gone and I felt like the kid in Slumdog Millionaire who falls into the outhouse pit.

I have smelled this once before and that was in Sydney, Australia in 1992. A series of storms forced a backup in the sewage plant pouring untreated water into Darling Harbor where we were diving. As soon as our show was over, we raced towards an adjacent fountain and poured buckets of clean water all over ourselves. But here I was stuck. I begged my Nepalese sister, Nishta to race inside and get a full bucket of clean water from the faucet and dump it on me. I was never so happy to be doused in all my life.

We spent the rest of the morning getting powdered and dumped until all the water bags were broken and the dust was liberally spread. I made it out to the street and rolled up and down daring kids in high windows to try to nail me. A couple of them did, but water falling from four stories doesn’t have the same impact that being clobbered from two feet away. Nonetheless, it draws a big reaction and our whole neighborhood exploded in color and laughter.

But that was only Phase I. My adventurous ex-wife Rachel and her husband Stephen were coming into town on an afternoon flight, so Hongkui and I showered up and grabbed a taxi to Thamel.  Just before arriving in Kathmandu, traffic came to a dead stop as legions of multi-colored teenagers roamed the streets chanting “Happy Holi” and spraying colors.

The traffic started moving, but we discovered the reason for the jam was a 100,000-person concert just next to Thamel.  The entire city was exploding and we were right in the middle of it. After an hour in traffic we made it to the twisting streets of Thamel where hundreds of people from all over the world roamed around wearing clothes so battered by color they came to a uniform muddy red hue.

We pulled into the Hotel Mandap, only to see the restaurant jam packed with Holi Zombies sucking down beers like it was Oktoberfest. I told many of my friends that Stephen and Rachel were coming, so one by one they all showed up until Stephen and Rachel bounced into the courtyard in person. At this point we were fairly clean, and we stuck out like sore thumbs. As chanters passed by we held out our arms and were pelted with fresh colors.

Rachel and Stephen made fast friends with the crew and before too long they blended in as if they worked at the SIRC. We were ten strong when we left the Mandap and became a street gang ourselves. We roamed the labyrinth until we came upon the Black Olive restaurant that featured great food and a Nepalese trio playing guitar, tabla and flute. I was really excited to see the guitar player playing a lefty axe, but he’d actually strung it up backwards!  The only left-handed guitar in Nepal and he was playing it right handed!

But he let me take a whack at it and as soon as he could see that I could play, he shoved a mic in my face and I whipped out a quick version of “You Can’t Always Get What You Want.” When I finished, I went back to the table where a giant hukkah was in full blaze. I looked over to Stephen who was just flabbergasted at the amount of fun he was having. He tapped me on the hand and said, “Man,