Last year I did the Portland Marathon on very little training. I had a nasty bout of anemia caused by (TMI ALERT!!) Hemorrhoids and that didn’t allow me to get up to training shape until mid-summer. On top of that, the 15-year old hand cycle I bought with the fund started by my old high school swimming team had been in a sad state of repairs. I was finding it very difficult to find a good aluminum welder in Portland who knew what they were doing with such a weird contraption. After a couple of attempts, I finally got the old mule back into competition shape with just a month to go before the race. Normally I’ve got at least a couple fifty-milers in me but the 2011 Portland Marathon turned out to be my longest ride of the year.  I was pretty psyched to kick it out in 2:02 – 12 minutes off my P.R. 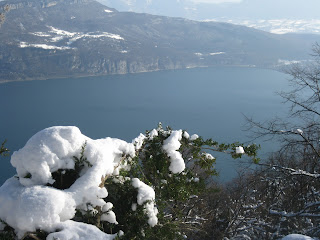 This photo has absolutely nothing to do with this story except that I'm writing from the shores of that lake and that's where I'm going to train as soon as Springtime hits!

But having had a blank season, I decided I wouldn’t take the fall or even the winter off. I was finally feeling strong again, and with the proper gear and a willingness to go out in the rain, you can maintain decent physical condition in the mild winters of the Pacific Northwest. As it turned out, the Winter of 2011-12 was extraordinarily mild. I rode, mostly dry, through November and had two spectacular sunny rides on the Springwater Corridor on both Christmas Eve and Christmas Day.

Unfortunately they were the last great rides on my 1997 Lightening Hand Cycle. The next time I rode, I found myself in the middle of a bike jam just north of the Portland Rose Garden (yes, we proudly get bike jams in Portland). In an attempt to avoid a city bus, one of the guidance handles on my bike got caught under a new Cadillac driven by an incredibly nice 70 year-old preacher’s wife on her way to evening services. I easily freed myself from her undercarriage and, after riding along for another block w/out noticing any difference, told her everything was fine. She could continue on her way without the slightest pangs of guilt (she felt awful!).

The problem was that she had actually delivered the death knell to my poor hand cycle. I didn't realize until I dismounted that the bottom of my frame had been severely compromised while I was being dragged. The next day when I rode, I noticed a lot of instability before it tore in two as I was exiting the Hawthorne Bridge.

Sixteen years into a hand cycling career in which I’d ridden more than 10,000 miles, competed in 16 marathons including two Portland Marathon victories, and I was done. Competitive hand cycles cost a minimum of $3000 and that just wasn’t in my budget.

That’s when misfortune turned to gold and I was saved. Off in the Midwest, my father was recovering from his own cycling accident when his lawyer informed him that he’d just won a $5k settlement with the guy who knocked him off his bike. Seeing as his bike survived the accident, he called me up and told me I should use the money to replace the old hand cycle. Less than two weeks into my grief, it was over. I would live to ride yet another Portland Marathon.

On the last weekend of April, after much research and lots of time waiting for a company in California to finish the welding job, my new hand cycle arrived. Three days later the Alberta St. Bike Coop put the finishing touches on it and I was chasing down the slower members of Portland’s ubiquitous bike peloton.
By the middle of summer I was up to 20 miles a day and had even beaten my previous marathon P.R., albeit on a flat, wind-aided ride. Disability Sports Oregon had arranged for Portland International Raceway to open to hand cycles once a week, so I was putting in more speed work than I ever had in my life. On a long 30 mile ride, I can’t go all out or I risk bonking far from home. But on the short two-mile loops I could force as much speed as my body could take. If I bonked, the furthest I could be from sanctuary was a mile. And from there I could yell for help.

I took a short break from training to drive down to Los Angeles and back, but two weeks later, I was back on the bike, cranking out miles and speed. Then one day I began hearing a clicking sound. It started slowly but after two days the click snapped every time I pedaled. When I got off the bike, I discovered my brand new bike had a cracked frame.

Tim, my bike builder from the Alberta St. Coop, gave it a spot weld, but in just a few days the frame cracked just outside the weld. My new killer hand cycle was kaput. I called the frame builders in California and emailed them a picture of the crack. They profusely apologized and told me a new frame was on the way, but it would take three weeks to build. That meant I would get my new, new bike just four days before the Portland Marathon.

In the midst of whittling down the List from Hell, my new frame showed up and I sent it off to the shop to have the old bike parts transferred onto the new frame. Two days later I took the bike for a quick spin around the shop to see if it had been assembled correctly. They made a few adjustments, but then the bike went into my garage until the morning of the race as I had no time at all for a real test ride.

Which brings me finally to race day. I was up before sunrise, pinned my number on the back of my new, new bike and slowly rolled towards downtown Portland. As I crossed the Steele Bridge, I noticed the gear shifting was horribly misaligned. I couldn’t even get into the easiest gear without yanking the chain into place with my hand. On a course with two big hills including the St. John’s Bridge, I was dead in the water before the race gun blew.

Not that I had a chance of winning – As race director for the hand cycling division of the Portland Marathon I’d recruited the best riders from the P.I.R. hand cycling series and four of them would easily beat me. But in the middle of summer I had my eyes set on breaking my P.R. at the age of 50. And so under chamber-of-commerce conditions on my brand new bike, I limped around the course in the exact same time I did the year before when I’d trained less than 300 miles. 2:02. A season that started with such promise had gone for naught: 1200 miles of training and not one second of improvement.

But it was a completed marathon nonetheless. In less than an hour I was at the Seraveza Packer Bar swilling ill-advised amounts of IPA while watching Aaron Rogers get his eye poked out by the errant finger of an Indianapolis Colts defensive lineman. After my second loss of the day, I navigated my chair back home and laid back in the recliner for one last nap.

In just a few hours I would officially be out of Portland and on a plane to Charlottesville, Va to play a concert with two of the greatest living Tibetan musicians. His Holiness the Dalai Lama was coming to town and we were going to celebrate in style.